DOWNLOAD THE GAME FREE
minizork.zip - 63k - Run RUNME.BAT to play
Downloading ...
Found your game? Great! Glad you found it! Please consider saying thanks by making a small donation to support DOSGames.com. There are also other ways you can help!
Need help running the game? Check our DOSBox Guide to run DOS games on modern computers.

$Buy the full version of Zork: The Great Underground Empire at GOG.com

DOSGames.com Review:  Rating: 5
Zork: The Great Underground Empire is a seminal interactive fiction game, and the first in a series of influential text adventure games from Infocom. I don't often add interactive fiction games to the archive (see IF Archive for more of those) but I'll make exceptions for exceptional games! Originally released for the TRS-80 in 1980, the DOS port keeps the story and gameplay of the original game. (Most people probably remember playing it on DOS anyways!) This version is actually "Mini-Zork", described as a "Reader's Digest" version of the full game intended as a demo. It's described in the included readme thusly: "This program is a sample of the first Zork text adventure, published around 1981. The full game is available in the Lost Treasures of Infocom collection, volume 1, as well as in the Zork Anthology." Truly a classic of the genre!

If you enjoy Zork: The Great Underground Empire, you might also enjoy playing these games: 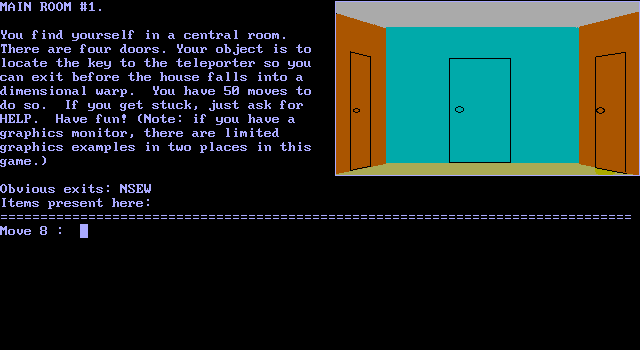 Zork: The Great Underground Empire, #904. Added to website: 2019-06-07. All copyrights, trademarks, etc, are property of their respective holders.
Back to top
Rating:
Saving
Saving, please wait
What is a file_id.diz file?
FILE_ID.DIZ is a plain text file containing a brief description of the content in an archive (ZIP file), usually written by the developers themselves. It was often used in archives distributed through bulletin board systems (BBS).
Zork: The Great Underground Empire screenshot