Last of the Free

DOWNLOAD THE GAME FREE
charlytheclown.zip - 2,709k
Downloading ...
Found your game? Great! Glad you found it! Please consider saying thanks by making a small donation to support DOSGames.com. There are also other ways you can help!
Need help running the game? Check our DOSBox Guide to run DOS games on modern computers.

This game works in DOSBox but not currently in-browser. Please download and play on your device. How to use DOSBox

DOSGames.com Review:  Rating: 3
Charly the Clown is a simple platformer game where you play as the titular Charly, a clown who for whatever reason has to run around collecting coins and do other Mario-esque things. You can throw things to kill enemies, and jump around to different levels collecting stuff. The level graphics are detailed and colorful, many of them being pre-rendered. The levels themselves are a bit short and contain a lot of the familiar tropes of the genre, right up to question mark blocks that you hit to get more coins. I also had the game crash on me more than once so it doesn't seem too stable. There are five levels total in the shareware version.

If you enjoy Charly the Clown, you might also enjoy playing these games: 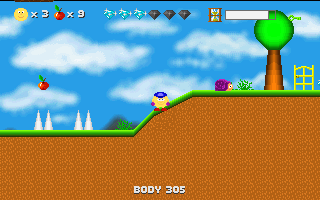 Charly the Clown, #834. Added to website: 2019-01-25. All copyrights, trademarks, etc, are property of their respective holders.
Back to top
Rating:
Saving
Saving, please wait
What is a file_id.diz file?
FILE_ID.DIZ is a plain text file containing a brief description of the content in an archive (ZIP file), usually written by the developers themselves. It was often used in archives distributed through bulletin board systems (BBS).
Charly the Clown screenshot