DOWNLOAD THE GAME FREE
animac.zip - 116k - Run ANIMAC.EXE to play
Downloading ...
Found your game? Great! Glad you found it! Please consider saying thanks by making a small donation to support DOSGames.com. There are also other ways you can help!
Need help running the game? Check our DOSBox Guide to run DOS games on modern computers.

DOSGames.com Review:  Rating: 3.5
ANIMAC (or "American Neutral Investigators' Mapierian Anticomplex") is an interesting game which, according to its developer, is influenced by "Scramble, Vanguard, Xevious, Defender, and Shamus." Flying your intrepid infiltrator space ship, you must infiltrate the baddies space thingie and shoot things and stuff. The game is presented in CGA (it was originally developed in the 80's although this version is dated 1991) and has simple PC speaker sounds. The game starts off slowly but it gets more difficult later on. A different kind of space shooting game with some maze / exploration elements and a slower, more deliberate pace.

If you enjoy ANIMAC, you might also enjoy playing these games: 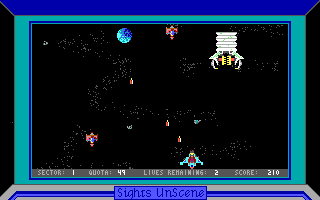 ANIMAC, #641. Added to website: 2018-06-09. All copyrights, trademarks, etc, are property of their respective holders.
Back to top
Rating:
Saving
Saving, please wait
What is a file_id.diz file?
FILE_ID.DIZ is a plain text file containing a brief description of the content in an archive (ZIP file), usually written by the developers themselves. It was often used in archives distributed through bulletin board systems (BBS).
ANIMAC screenshot