DOWNLOAD THE GAME FREE
DOSBOX_ZULULA.ZIP - 186k - Run ZULULA.EXE to play
Downloading ...
Found your game? Great! Glad you found it! Please consider saying thanks by making a small donation to support DOSGames.com. There are also other ways you can help!
Need help running the game? Check our DOSBox Guide to run DOS games on modern computers.

Original archive (zulu30b.zip, 186k) - The main download file above (DOSBOX_ZULULA.ZIP) is pre-configured to work DOSBox. This file, zulu30b.zip, is the original and may require installation / setup.

DOSGames.com Review:  Rating: 2
Every year, opponents from all over the country of Zala journey to Zulula for a fighter's tournament. First choose your character from this quirky selection: Land Octopus, Ostrich, Cyclops, or even Human! Then battle against a computer or other human opponent in a fight to the death! The main problem with this game is that there isn't a lot of strategy or technique to the fighting. Press the Insert key to attack, arrows to move, and Enter to toggle blocking mode. There is more to it than that, as the manual explains, but there just isn't a lot of depth here to the game itself, even though it's presented in an interesting graphical style and includes some very unique and interesting character options.
FILE_ID.DIZ:
-= The Tournament of Zulula 3.0b =-
Greatly enhanced version of this
tournament game.  Battle 8 different
races/creatures as you fight your
way to the top of the Tournament of
Zulula.  Features great action,
CGA graphics and great sound effects
by: /\ Oracle Software enr. /\

Play Tournament of Zulula in Browser

If you enjoy Tournament of Zulula, you might also enjoy playing these games: 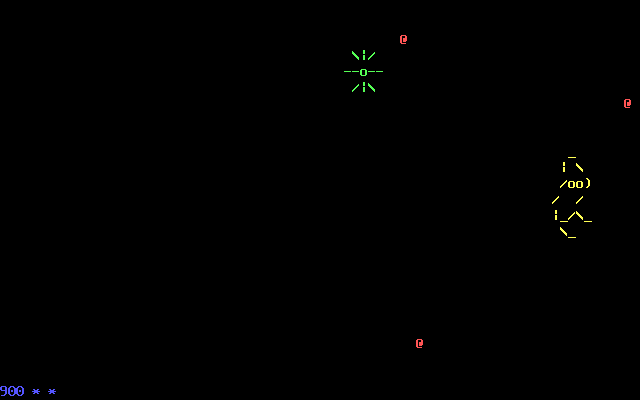 Tournament of Zulula, The, #644. Added to website: 2018-07-15. All copyrights, trademarks, etc, are property of their respective holders.
Back to top
Rating:
Saving
Saving, please wait
What is a file_id.diz file?
FILE_ID.DIZ is a plain text file containing a brief description of the content in an archive (ZIP file), usually written by the developers themselves. It was often used in archives distributed through bulletin board systems (BBS).
Tournament of Zulula screenshot