DOWNLOAD THE GAME FREE
avoid.zip - 6k - Run AVOID.EXE to play
Downloading ...
Found your game? Great! Glad you found it! Please consider saying thanks by making a small donation to support DOSGames.com. There are also other ways you can help!
Need help running the game? Check our DOSBox Guide to run DOS games on modern computers.

DOSGames.com Review:  Rating: 2
Avoid the Awful Thing that Vaguely Resembles a Banana!! (!) is likely the winner of the longest name of any game on this website. It is not the winner of the "best gameplay" department, but it's a text-mode game from 1987, so ... yeah. The object, as described by the game itself, is to "Pick-up @ while avoiding evil creatures." So you basically do that. Your ... spider (?) thing moves around collecting @ symbols, while banana, hamburger (I think) and possibly other enemies chase you around. This continues until you are caught three times. Some of the @ symbols act like Pac-Man's power pellets enabling you to kill the baddies instead (watch for your character's design to change after collecting a @ to know that you can go after 'em). Not a very deep game but definitely a unique one! (Also the controls are a bit weird, likely designed for what is now the standard keyboard, review them carefully on the title screen!)

Play Avoid the Awful Thing that Vaguely Resembles a Banana!! in Browser

If you enjoy Avoid the Awful Thing that Vaguely Resembles a Banana!!, you might also enjoy playing these games: 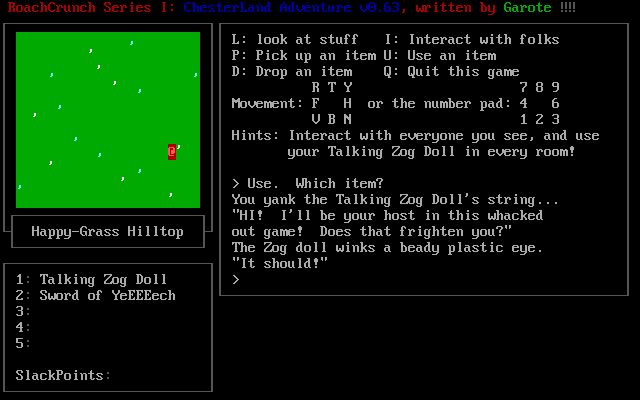