DOWNLOAD THE GAME FREE
aattack.zip - 282k - Run ALIATT.EXE to play
Downloading ...
Found your game? Great! Glad you found it! Please consider saying thanks by making a small donation to support DOSGames.com. There are also other ways you can help!
Need help running the game? Check our DOSBox Guide to run DOS games on modern computers.

DOSGames.com Review:  Rating: 3
Alien Attack is a decently impressive game, especially when you see that it was coded from scratch (except for the sound library) by a 14 year old in Pascal. (There is also another game called Alien Attack on this website, which is a totally different game.) Anyways it's essentially an upgraded Asteroids type game where you blast rocks that break into smaller rocks. It features an upgrade system similar to Raptor where you buy upgrades with cash you collect during the levels. It's a decent game with nice rotation animations on the ship. Not a ton of depth but the upgrades give you a little more incentive to continue playing, and the controls are generally solid.

If you enjoy Alien Attack, you might also enjoy playing these games: 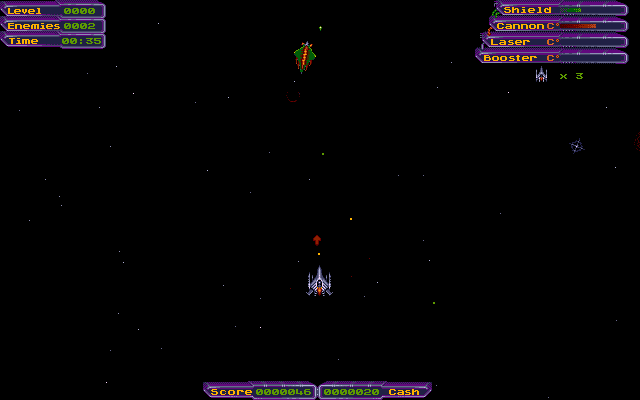 Alien Attack, #1418. Added to website: 2021-02-08. All copyrights, trademarks, etc, are property of their respective holders.
Back to top
Rating:
Saving
Saving, please wait
What is a file_id.diz file?
FILE_ID.DIZ is a plain text file containing a brief description of the content in an archive (ZIP file), usually written by the developers themselves. It was often used in archives distributed through bulletin board systems (BBS).
Alien Attack screenshot