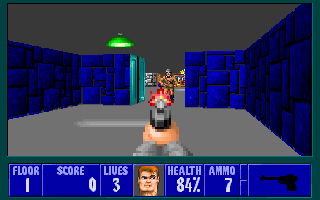 Jack Flash: Mutiny of the Things

DOWNLOAD THE GAME FREE
JackFlash_registered.zip - 617k - Run JACK.EXE to play
Downloading ...
Found your game? Great! Glad you found it! Please consider saying thanks by making a small donation to support DOSGames.com. There are also other ways you can help!
Need help running the game? Check our DOSBox Guide to run DOS games on modern computers.

DOSGames.com Review:  Rating: 3
Jack Flash seems inspired by the great platforming games made by companies like Apogee and Epic in the early 90's. It doesn't quite achieve greatness like some of those games, but it's a decent enough game that hasn't received much attention. You of course play the titular Jack Flash, who has been tasked by the government to subdue the "things" that have been brought to life by a mad scientist. You do so by using your energy gun, which works sort of like the Ghostbusters' proton packs. It must be recharged regularly at generator stations (hold Enter while standing in front of one) to continue subduing the "things". The primary issue with the game is the floaty movement and jumping controls, as well as the sometime dodgy camera (which can be moved to look around thankfully). It has a unique feel to it and overall is enjoyable to play. If you remember it nostalgically or want to try a different kind of platformer, worth checking out! (MVP Software released the full version of this game for free.)
FILE_ID.DIZ:
Jack Flash by MVP Software. Jump into the
action with Jack and his Succ-O-Matic as you
try to stop Evil Eddie and his dastardly
"things" from destroying the universe.
Parallax-scrolling, side-splitting humor.
More zest than a Microsoft press release.
More action than a Stallone flick, and cuter
too! Relive the good old days when mad
scientists threatened mankind and games were
fun! Req 386, VGA; supports most sound cards.

If you enjoy Jack Flash, you might also enjoy playing these games: Jack Flash: Mutiny of the Things, #684. Added to website: 2018-09-01. All copyrights, trademarks, etc, are property of their respective holders.
Back to top
Rating:
Saving
Saving, please wait
What is a file_id.diz file?
FILE_ID.DIZ is a plain text file containing a brief description of the content in an archive (ZIP file), usually written by the developers themselves. It was often used in archives distributed through bulletin board systems (BBS).
Jack Flash screenshot