DOWNLOAD THE GAME FREE
wempire.zip - 237k - Run EMPIRE.EXE to play
Downloading ...
Found your game? Great! Glad you found it! Please consider saying thanks by making a small donation to support DOSGames.com. There are also other ways you can help!
Need help running the game? Check our DOSBox Guide to run DOS games on modern computers.

DOSGames.com Review:  Rating: 3
World Empire is a Risk-like world domination game where the object is to take over the world by conquering different countries one by one. The main innovation of this game versus others in the genre is the concept of ideologies. There are four ideologies in the game (one for each player, if there are four playing) and depending on which ideology the country you're taking over supports, it may make things easier or more difficult for you. The game supports both keyboard and mouse, although the mouse is used to move the keyboard cursor around, not as a mouse cursor per se, so you're probably better off just sticking with the keyboard. Generally the game plays well enough, and has adequate graphics and sounds (there are some little cutscenes that play out when you attack countries) but the gameplay itself is pretty basic. This game spawned a series of World Empire games that continue to this day, check the World Empire V page for the latest version.
FILE_ID.DIZ:
_World Empire_
The classic strategy game.  Battle
the computer or fellow humans for
world domination!  This award-
winning program offers hours, nay,
days - of enjoyable hegemony.
Viable Software Alternatives
with Ultimate Software

If you enjoy World Empire, you might also enjoy playing these games: 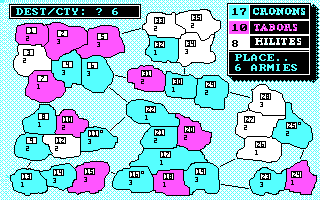 World Empire, #718. Added to website: 2018-10-12. All copyrights, trademarks, etc, are property of their respective holders.
Back to top
Rating:
Saving
Saving, please wait
What is a file_id.diz file?
FILE_ID.DIZ is a plain text file containing a brief description of the content in an archive (ZIP file), usually written by the developers themselves. It was often used in archives distributed through bulletin board systems (BBS).
World Empire screenshot