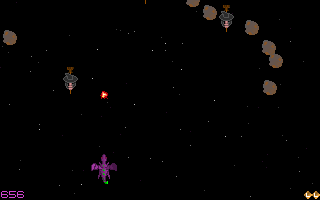 DOWNLOAD THE GAME FREE
YUMB.zip - 254k - Run YUMBCRK.EXE to play
Downloading ...
Found your game? Great! Glad you found it! Please consider saying thanks by making a small donation to support DOSGames.com. There are also other ways you can help!
Need help running the game? Check our DOSBox Guide to run DOS games on modern computers.

DOSGames.com Review:  Rating: 2.5
YUMB is a text-mode dice game, which looks similar to Yacht / Yahtzee. The author describes it as follows: "Yumb is dice greed game, we guaranty that Yumb will challenge your mind and sharpen your skills." You can already tell that English is probably not the author's first language, and so the instructions for the game are not particularly clear. There seem to be more categories than the typical Yacht game, but it works similarly, where you make different combinations while holding / re-rolling five dice to score points. Originally the game included a file which prevented playing the game after a certain time passed! But FooneTuring hacked the executable to make it run in DOSBox; make sure to run YUMBCRK.EXE to play. (Originally seen on an episode of Shovelware Diggers.)
FILE_ID.DIZ:
YUMB Game of skill, challenge and ...
You can play by yourself or with computer
you can save the game for later play.
VERY easy installation/configuration. Will
even work on a 1-floppy 8088 PC!
Keywords: YUMB DICE
Auth: Vladimir Glusica  v1.2 11-03-92

If you enjoy YUMB, you might also enjoy playing these games: YUMB, #1014. Added to website: 2019-11-06. All copyrights, trademarks, etc, are property of their respective holders.
Back to top
Rating:
Saving
Saving, please wait
What is a file_id.diz file?
FILE_ID.DIZ is a plain text file containing a brief description of the content in an archive (ZIP file), usually written by the developers themselves. It was often used in archives distributed through bulletin board systems (BBS).
YUMB screenshot