DOWNLOAD THE GAME FREE
willybeer.zip - 196k - Run GOSB.BAT to play
Downloading ...
Found your game? Great! Glad you found it! Please consider saying thanks by making a small donation to support DOSGames.com. There are also other ways you can help!
Need help running the game? Check our DOSBox Guide to run DOS games on modern computers.

DOSGames.com Review:  Rating: 2
Willy the Beer Varmit's War is not really as interesting as it's title suggests. Sorry if you were lured in here by its name! It's similar to the many "tank" or Worms style games where you set your angle and velocity, choose your weapon, and launch projectiles at your opponent (either a second player or a computer AI controlled opponent). There are a variety of weapons to choose from, but their effects are not as varied as in something like Scorched Earth, and I noticed at least one bug, but since this was a university freshman's first released game, we'll give him some leeway! Really not much to recommend it above Scorched Earth or similar games though.

If you enjoy Willy the Beer Varmit's War, you might also enjoy playing these games: 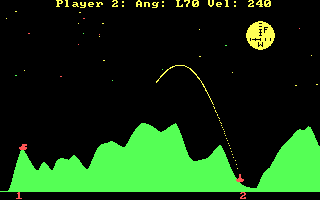 Willy the Beer Varmit's War, #983. Added to website: 2019-09-18. All copyrights, trademarks, etc, are property of their respective holders.
Back to top
Rating:
Saving
Saving, please wait
What is a file_id.diz file?
FILE_ID.DIZ is a plain text file containing a brief description of the content in an archive (ZIP file), usually written by the developers themselves. It was often used in archives distributed through bulletin board systems (BBS).
Willy the Beer Varmit's War screenshot