DOWNLOAD THE GAME FREE
DOSBOX_WAR2.ZIP - 10,434k - Run WAR2.EXE to play
Downloading ...
Found your game? Great! Glad you found it! Please consider saying thanks by making a small donation to support DOSGames.com. There are also other ways you can help!
Need help running the game? Check our DOSBox Guide to run DOS games on modern computers.

Original archive (war2demo.zip, 10,589k) - The main download file above (DOSBOX_WAR2.ZIP) is pre-configured to work DOSBox. This file, war2demo.zip, is the original and may require installation / setup.

DOSGames.com Review:  Rating: 5
Blizzard's follow-up sequel to their successful Warcraft: Orcs & Humans RTS game was immensely successful, and people still continue to play it today. Warcraft II continues the same style as its predecessor, but adds numerous features and innovations which make it a superior game to the original. Again you choose to play as either the humans or the orcs, and battle against the other. You can play against a human opponent over a local network or the Internet, or you can play against the computer. The graphics are detailed and well drawn, and the sound effects and music are classic ("Zug zug!"). This shareware version (I would've called it a demo but it clearly says shareware on the title screen) includes six unique maps not found in the full game, as well as one demo multiplayer map. Truly a modern classic game and definitely worth trying for RTS fans.

If you enjoy Warcraft 2, you might also enjoy playing these games: 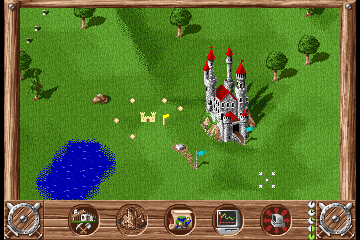 Warcraft 2: Tides of Darkness, #693. Added to website: 2018-09-20. All copyrights, trademarks, etc, are property of their respective holders.
Back to top
Rating:
Saving
Saving, please wait
What is a file_id.diz file?
FILE_ID.DIZ is a plain text file containing a brief description of the content in an archive (ZIP file), usually written by the developers themselves. It was often used in archives distributed through bulletin board systems (BBS).
Warcraft 2: Tides of Darkness screenshot