DOWNLOAD THE GAME FREE
DOSBOX_SKYNET.ZIP - 10,848k - Run SKYNET.EXE to play
Downloading ...
Found your game? Great! Glad you found it! Please consider saying thanks by making a small donation to support DOSGames.com. There are also other ways you can help!
Need help running the game? Check our DOSBox Guide to run DOS games on modern computers.

Original archive (skydemo.zip, 11,208k) - The main download file above (DOSBOX_SKYNET.ZIP) is pre-configured to work DOSBox. This file, skydemo.zip, is the original and may require installation / setup.

DOSGames.com Review:  Rating: 4
SkyNET (aka Terminator: SkyNET) is the final of three Terminator based FPS games that Bethesda released in the 90's. It was originally planned as an expansion pack for Terminator: Future Shock, SkyNET was released as a separate game, with an updated version of the 3D engine used. The game is pretty advanced for its time, with many different weapons, enemies, and even vehicles that you can drive. There are a lot of evil robots to destroy and plenty of things to shoot. The demo includes a single level of the 8 missions included in the full game, along with a single multiplayer map.

If you enjoy Terminator: SkyNET, you might also enjoy playing these games: 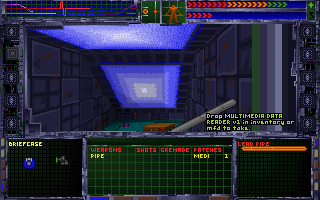 Terminator: SkyNET, #831. Added to website: 2019-01-22. All copyrights, trademarks, etc, are property of their respective holders.
Back to top
Rating:
Saving
Saving, please wait
What is a file_id.diz file?
FILE_ID.DIZ is a plain text file containing a brief description of the content in an archive (ZIP file), usually written by the developers themselves. It was often used in archives distributed through bulletin board systems (BBS).
Terminator: SkyNET screenshot