DOWNLOAD THE GAME FREE
sbane.zip - 185k - Run SB.EXE to play
Downloading ...
Found your game? Great! Glad you found it! Please consider saying thanks by making a small donation to support DOSGames.com. There are also other ways you can help!
Need help running the game? Check our DOSBox Guide to run DOS games on modern computers.

DOSGames.com Review:  Rating: 3
Sorcerer's Bane is a little-known Roguelike RPG textmode game that has certain features that some other similar games lack, while also simplifying certain gameplay elements quite a bit compared to say Nethack or Crawl. Before beginning your Sorcerer's Bane adventure you create a character by rolling stats and choosing options. Then you venture into the dungeon, where battles are random (like in many console RPGs) and fought using a menu system (fight, cast, run, etc). Unlike most Roguelikes, you don't need to memorize a bunch of keyboard keys, you mostly just move around using the arrow keys and you will be presented with menus to choose what you want to do, like open a treasure chest or go up/down stairs. It also offers mouse support, which is something not often found in similar games, although keyboard controls work much better. If you enjoy Roguelikes and also console RPGs with random battles, and are interested in playing something a bit less intense than the big well-known Roguelikes, try this out.

If you enjoy Sorcerer's Bane, you might also enjoy playing these games: 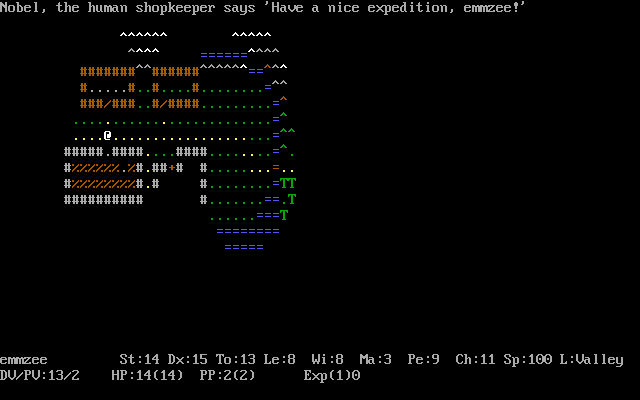 Sorcerer's Bane, #692. Added to website: 2018-09-19. All copyrights, trademarks, etc, are property of their respective holders.
Back to top
Rating:
Saving
Saving, please wait
What is a file_id.diz file?
FILE_ID.DIZ is a plain text file containing a brief description of the content in an archive (ZIP file), usually written by the developers themselves. It was often used in archives distributed through bulletin board systems (BBS).
Sorcerer's Bane screenshot