DOWNLOAD THE GAME FREE
rayman_d.zip - 5,008k - Run RAYKIT.BAT to play
Downloading ...
Found your game? Great! Glad you found it! Please consider saying thanks by making a small donation to support DOSGames.com. There are also other ways you can help!
Need help running the game? Check our DOSBox Guide to run DOS games on modern computers.

$Buy the full version of Rayman Designer at GOG.com

DOSGames.com Review:  Rating: 4.5
Rayman is a popular console character with many games available in the series for a number of platforms, but not many people know that there were Rayman games made for PC as well, including DOS. Rayman Designer is a bit of a strange one. Released as a Windows game with a Windows-based level editor, the game itself runs in DOS, and is presumably based on earlier Rayman titles. As with most Rayman games your goal is to make it to the end of the level, jumping and punching your way through enemies and many obstacles. This demo version provides you with some of the levels from the full game, and of course no level editor. The gameplay is fluid and the graphics and sounds are great. Get ready for some long loading times but playing this game could easily fool you into thinking this was a release for a 90's gaming console. (This game is sometimes associated with Rayman Gold, since Rayman Designer was included on the CD release of Rayman Gold.) Thanks goes to Mr Fibble of DOS Games Archive for providing the pre-installed and configured version of the demo used here.

If you enjoy Rayman Designer, you might also enjoy playing these games: 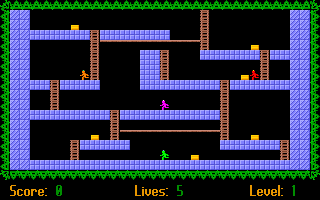 Rayman Designer, #1176. Added to website: 2020-08-02. All copyrights, trademarks, etc, are property of their respective holders.
Back to top
Rating:
Saving
Saving, please wait
What is a file_id.diz file?
FILE_ID.DIZ is a plain text file containing a brief description of the content in an archive (ZIP file), usually written by the developers themselves. It was often used in archives distributed through bulletin board systems (BBS).
Rayman Designer screenshot