DOWNLOAD THE GAME FREE
quinta.zip - 29k - Run QUINTA.EXE to play
Downloading ...
Found your game? Great! Glad you found it! Please consider saying thanks by making a small donation to support DOSGames.com. There are also other ways you can help!
Need help running the game? Check our DOSBox Guide to run DOS games on modern computers.

DOSGames.com Review:  Rating: 4
Quinta is a competently made board-type game which is similar to various Gomoku-like games, most notably Pente as the author themselves points out. The goal is to take turns with your opponent placing markers on the grid, trying to get five in a row of your own color. If you surround two of your opponent's pieces in a row with two of your own color, you'll "capture" your opponent's pieces (removing them from the grid). The game plays fluidly and offers several options to toggle. You can play a two player game, or against the CPU, or watch the CPU battle itself (thrilling!) and also change the CPU difficulty from Novice to Advanced. (Both seemed difficult to me but I've never really played these kinda games before.)

If you enjoy Quinta, you might also enjoy playing these games: 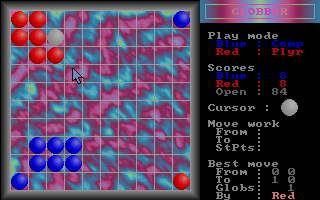 Quinta, #1447. Added to website: 2021-03-17. All copyrights, trademarks, etc, are property of their respective holders.
Back to top
Rating:
Saving
Saving, please wait
What is a file_id.diz file?
FILE_ID.DIZ is a plain text file containing a brief description of the content in an archive (ZIP file), usually written by the developers themselves. It was often used in archives distributed through bulletin board systems (BBS).
Quinta screenshot