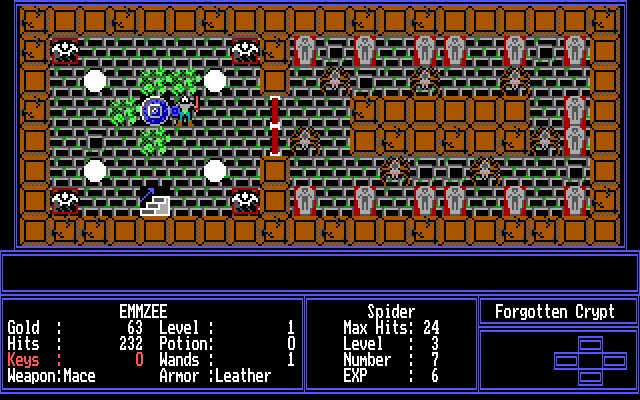 DOWNLOAD THE GAME FREE
quadroid.zip - 144k - Run QUADROID.EXE to play
Downloading ...
Found your game? Great! Glad you found it! Please consider saying thanks by making a small donation to support DOSGames.com. There are also other ways you can help!
Need help running the game? Check our DOSBox Guide to run DOS games on modern computers.

DOSGames.com Review:  Rating: 2
There are plenty of Tetris clones out there, and Quadroid is one of them. It has a great, epic-looking title screen, which sets expectations high for the game. However the actual game is only passable. The basic gameplay is the same as Tetris, although the controls seem a bit laggy, and the keyboard handling seems a bit suspect. Originally I chose Enter as the rotate key, and this caused the pieces to not rotate correctly. Anyways, there are some Soundblaster sound effects, but they don't seem to work correctly in DOSBox, with some PC speaker beeps sneaking in. Overall, although there is more of a goal and progression here than other Tetris games (fifteen levels with an endgame) and bombs, there are much better Tetris-type games available.
FILE_ID.DIZ:
QUADROID GREAT NEW VERSION OF TETRIS,
WITH REAL NICE  SOUNDS.  DIRECT  FROM
FRANCE!!

If you enjoy Quadroid, you might also enjoy playing these games: Quadroid, #1517. Added to website: 2021-06-24. All copyrights, trademarks, etc, are property of their respective holders.
Back to top
Rating:
Saving
Saving, please wait
What is a file_id.diz file?
FILE_ID.DIZ is a plain text file containing a brief description of the content in an archive (ZIP file), usually written by the developers themselves. It was often used in archives distributed through bulletin board systems (BBS).
Quadroid screenshot