DOWNLOAD THE GAME FREE
monopoly2.zip - 39k - Run MONOPOLY.EXE to play
Downloading ...
Found your game? Great! Glad you found it! Please consider saying thanks by making a small donation to support DOSGames.com. There are also other ways you can help!
Need help running the game? Check our DOSBox Guide to run DOS games on modern computers.

DOSGames.com Review:  Rating: 2
You've probably played Monopoly before; the Parker Brothers' board game has become a ubiquitous game to play when you want to engage in a bitter and fruitless contest with your friends and/or relatives. Now you can play it in text-mode! This version of the game is fairly basic but it does attempt to simulate the board game as closely as it can using basic text 'graphics'. Not the best text-based version of Monopoly that you can find though. (The game is actually just titled "Monopoly" but it's identified with Hoops in the title here to differentiate it from the other Monopoly game(s) on this site. Also I couldn't find a date for when the game was made so I arbitrarily assigned it a date of 1984, which is likely incorrect.)

If you enjoy Monopoly (Hoops), you might also enjoy playing these games: 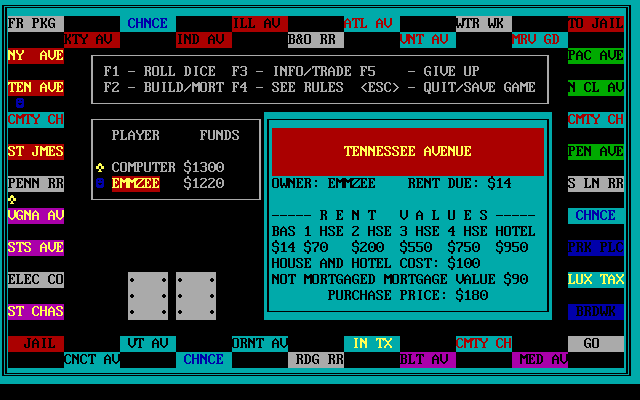 Monopoly (Hoops), #612. Added to website: 2018-03-17. All copyrights, trademarks, etc, are property of their respective holders.
Back to top
Rating:
Saving
Saving, please wait
What is a file_id.diz file?
FILE_ID.DIZ is a plain text file containing a brief description of the content in an archive (ZIP file), usually written by the developers themselves. It was often used in archives distributed through bulletin board systems (BBS).
Monopoly (Hoops) screenshot