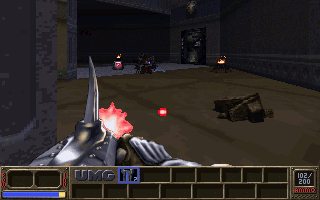 DOWNLOAD THE GAME FREE
DOSBOX_KROZ.ZIP - 30k - Run kingdom.com to play
Downloading ...
Found your game? Great! Glad you found it! Please consider saying thanks by making a small donation to support DOSGames.com. There are also other ways you can help!
Need help running the game? Check our DOSBox Guide to run DOS games on modern computers.

Original archive (krozfree.zip, 3,984k) - The main download file above (DOSBOX_KROZ.ZIP) is pre-configured to work DOSBox. This file, krozfree.zip, is the original and may require installation / setup.

DOSGames.com Review:  Rating: 3
Ahh, memories! Even before the days of ZZT, I remember playing this ASCII gem. It's a decent action/adventure game, if you're willing to look past the dated graphics and sound. Apogee Software (now called 3D Realms) has released all of the KROZ games as freeware! This single ZIP file includes: Kingdom of Kroz, Caverns of Kroz, Castle of Kroz, Dungeons of Kroz, Caverns of Kroz 2, Dungeons of Kroz 2, Hints for Kroz, Kingdom of Kroz 2, Shrine of Kroz, Super Kroz Trilogy, and the Lost Adventures of Kroz. Whew! It also even includes Pascal source code for several of the games, so if you're a Pascal programmer (kudos to you, sir/madam) then you may enjoy that.

If you enjoy Kroz, you might also enjoy playing these games: Kingdom of Kroz (Kroz series), #156. Added to website: 2017-11-26. All copyrights, trademarks, etc, are property of their respective holders.
Back to top
Rating:
Saving
Saving, please wait
What is a file_id.diz file?
FILE_ID.DIZ is a plain text file containing a brief description of the content in an archive (ZIP file), usually written by the developers themselves. It was often used in archives distributed through bulletin board systems (BBS).
Kingdom of Kroz screenshot