DOWNLOAD THE GAME FREE
howtwo.zip - 62k - Run HOWTWO.EXE to play
Downloading ...
Found your game? Great! Glad you found it! Please consider saying thanks by making a small donation to support DOSGames.com. There are also other ways you can help!
Need help running the game? Check our DOSBox Guide to run DOS games on modern computers.

DOSGames.com Review:  Rating: 2.5
How-Two Build a Robot is not, as you might assume, a robot-building simulation game. Rather it's an action/arcade game, somewhat similar to Elevator Action and probably many other games like this. The goal is to ... yes, build a robot. You do so by collecting parts, and then trying to assemble them into a working robot. The main enemy here seems to be your rapidly decreasing battery power, and never knowing which parts are in the boxes or where they're supposed to go. It's a difficult game with a lot of rules and things to remember!
Instructions:
Left & Right - Move
1-9 - Choose elevator floor
Alphabet keys - Control hydraulic lifts
Up - Pick up a box
Down - Drop a box
W - Work on robot (when prompted)

If you enjoy How-Two Build a Robot, you might also enjoy playing these games: 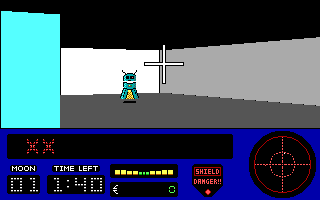 How-Two Build a Robot, #1087. Added to website: 2020-04-28. All copyrights, trademarks, etc, are property of their respective holders.
Back to top
Rating:
Saving
Saving, please wait
What is a file_id.diz file?
FILE_ID.DIZ is a plain text file containing a brief description of the content in an archive (ZIP file), usually written by the developers themselves. It was often used in archives distributed through bulletin board systems (BBS).
How-Two Build a Robot screenshot