DOWNLOAD THE GAME FREE
dunjax.zip - 22k - Run D.EXE to play
Downloading ...
Found your game? Great! Glad you found it! Please consider saying thanks by making a small donation to support DOSGames.com. There are also other ways you can help!
Need help running the game? Check our DOSBox Guide to run DOS games on modern computers.

DOSGames.com Review:  Rating: 2
Dunjax is not a dungeon-crawling / RPG as you might surmise from its name. Instead it is a side-scrolling run and gun game, where you fight your way through hordes of demons and other monsters Contra-style. Your character can jump quite high (although you're somewhere in outer space I think so maybe it's just reduced planetary gravity) and have unlimited ammo. The game is somewhat difficult to play since your character moves in sprite-sized blocks rather than moving smoothly. Also jumping is awkward at best: You press UP to jump, but you cannot hold both UP and LEFT/RIGHT at the same time, you have to press UP first, THEN hold the direction you want to move. I also got trapped a few times by enemies and couldn't move, and it seemed like I glitched through walls sometimes as well. Not super fun to play, but it's a game that I think many people will remember playing (albeit probably briefly) in the early 90's. (The author has released an updated version many years after its initial DOS release that you can play in-browser at dunjax.com.)

If you enjoy Dunjax, you might also enjoy playing these games: 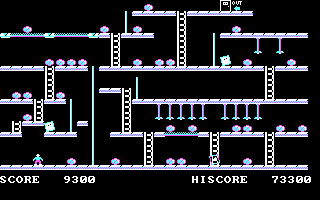 Dunjax, #655. Added to website: 2018-08-06. All copyrights, trademarks, etc, are property of their respective holders.
Back to top
Rating:
Saving
Saving, please wait
What is a file_id.diz file?
FILE_ID.DIZ is a plain text file containing a brief description of the content in an archive (ZIP file), usually written by the developers themselves. It was often used in archives distributed through bulletin board systems (BBS).
Dunjax screenshot