DOWNLOAD THE GAME FREE
DOSBOX_DESCENT2.ZIP - 4,163k - Run D2DEMO.EXE to play
Downloading ...
Found your game? Great! Glad you found it! Please consider saying thanks by making a small donation to support DOSGames.com. There are also other ways you can help!
Need help running the game? Check our DOSBox Guide to run DOS games on modern computers.

$Buy the full version of Descent 2 on Steam

Original archive (d2demo10.zip, 4,207k) - The main download file above (DOSBOX_DESCENT2.ZIP) is pre-configured to work DOSBox. This file, d2demo10.zip, is the original and may require installation / setup.

DOSGames.com Review:  Rating: 4.5
The sequel to the awesome original Descent game, this game picks up right where the first left off. You again fly your ship with full range of movement around the many mine shafts destroying enemy robots. There are of course new enemies to fight and new features like the Guide-bot. The engine used seems the same engine used in the original game with some minor additions, but the graphics look a little better and it still plays quite well and runs smoothly ... at least in DOSBox, not sure about hardware back when it was released in 1996! A great game and worthy sequel, despite the sometimes motion-sickness inducing movements. There are three levels to try in this demo version.

If you enjoy Descent 2, you might also enjoy playing these games: 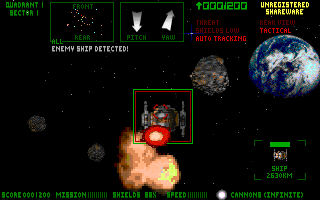 Descent II, #807. Added to website: 2018-12-29. All copyrights, trademarks, etc, are property of their respective holders.
Back to top
Rating:
Saving
Saving, please wait
What is a file_id.diz file?
FILE_ID.DIZ is a plain text file containing a brief description of the content in an archive (ZIP file), usually written by the developers themselves. It was often used in archives distributed through bulletin board systems (BBS).
Descent 2 screenshot