DOWNLOAD THE GAME FREE
DOSBOX_CDRAKE.ZIP - 2,124k - Run DRAKE.EXE to play
Downloading ...
Found your game? Great! Glad you found it! Please consider saying thanks by making a small donation to support DOSGames.com. There are also other ways you can help!
Need help running the game? Check our DOSBox Guide to run DOS games on modern computers.

Original archive (cdrake.zip, 2,169k) - The main download file above (DOSBOX_CDRAKE.ZIP) is pre-configured to work DOSBox. This file, cdrake.zip, is the original and may require installation / setup.

DOSGames.com Review:  Rating: 4
Crazy Drake is a duck / superhero who clearly is aspiring to be Earthworm Jim. The SNES / Genesis game starring an Earthworm (which was later ported to many other systems, even DOS!) was clearly an inspiration for this game. Crazy Drake moves much like Earthworm Jim, and like him has a gun with unlimited ammo. The levels have great graphics and nice animations. Again like Earthworm Jim, there are various entertaining gameplay elements scattered around, like riding balloons over a shark pit. The game controls generally well, and the music is repetitive but catchy. I hate to keep comparing the two, but they're so similar in style that if you like Earthworm Jim, you'll probably like this one too. (Note: When playing in-browser, the keyboard arrow keys may not work entirely correctly, ex trying to shoot up/left. If this is the case for you, try using the numeric keypad instead if your keyboard has one.)
FILE_ID.DIZ:
CRAZY DRAKE V1.0 by One Reality *VGA*
Super arcade action scrolling game like Earth
Worm Jim.  Jump, climb, run, swing and shoot
your way through the hugh levels while you
collect bonus items and blow away the bad
guys.  Each level has its own boss to
challenge your progress.  Supports all Sound
Blasters and Gravis Ultrasound. Cool Graphics
Sounds, Music, Parallaxing Backgrounds and
Much more!  Copyright Neurotech Software.

If you enjoy Crazy Drake, you might also enjoy playing these games: 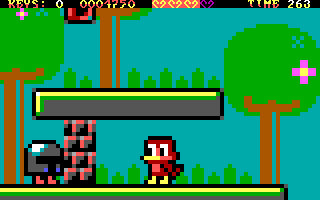 Crazy Drake, #670. Added to website: 2018-08-19. All copyrights, trademarks, etc, are property of their respective holders.
Back to top
Rating:
Saving
Saving, please wait
What is a file_id.diz file?
FILE_ID.DIZ is a plain text file containing a brief description of the content in an archive (ZIP file), usually written by the developers themselves. It was often used in archives distributed through bulletin board systems (BBS).
Crazy Drake screenshot