DOWNLOAD THE GAME FREE
catacomb.zip - 73k - Run CATACOMB.EXE to play
Downloading ...
Found your game? Great! Glad you found it! Please consider saying thanks by making a small donation to support DOSGames.com. There are also other ways you can help!
Need help running the game? Check our DOSBox Guide to run DOS games on modern computers.

$Buy the full version of Catacomb at GOG.com

DOSGames.com Review:  Rating: 4
Before the Catacomb series went 3D, it started as a 2D action / maze / Gauntlet-like game. Similarly to how Wolfenstein went from 2D to 3D, so did Catacomb. This game was created by the founders of id Software for Softdisk before they moved on to found their own company. It plays similarly to Gauntlet, although the levels are a lot more sparse. As you run around in the CGA/EGA levels and shoot demons, you will also pick up health and other powerups. You can hold the Alt key to strafe, which became common in later 3D games but is rare in a 2D game like this. This strafing technique is useful to shoot the walls and find secrets, since many are hidden throughout the levels. (This game was apparently distributed for free by Softdisk to promote their Gamer's Edge subscription service. The full game is known as either "The Catacomb" or "Catacomb II".)

If you enjoy Catacomb, you might also enjoy playing these games: 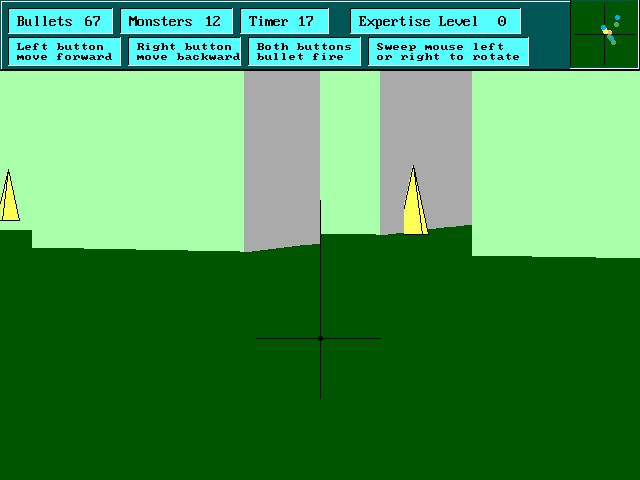 Catacomb, #651. Added to website: 2018-07-28. All copyrights, trademarks, etc, are property of their respective holders.
Back to top
Rating:
Saving
Saving, please wait
What is a file_id.diz file?
FILE_ID.DIZ is a plain text file containing a brief description of the content in an archive (ZIP file), usually written by the developers themselves. It was often used in archives distributed through bulletin board systems (BBS).
Catacomb screenshot