DOWNLOAD THE GAME FREE
bgmvp.zip - 165k - Run BG.EXE to play
Downloading ...
Found your game? Great! Glad you found it! Please consider saying thanks by making a small donation to support DOSGames.com. There are also other ways you can help!
Need help running the game? Check our DOSBox Guide to run DOS games on modern computers.

DOSGames.com Review:  Rating: 2.5
Battle Ground is an obscure early release from MVP Software, who would go on to be a popular developer/publisher of shareware in the early 90's. This game, developed by Keith Laverty and Amar Gopal, is a CGA mode WW2 battle simulator between soldiers from the two sides. You need to select your troops, move them around, assign them to fire their weapons, call in an air strike, etc. It's turn-based and movement is slow (soldiers can only move a short distance per turn) and there is no mouse control which would've made the game a lot easier to play, but since the game was released in 1986 that's pretty early for mouse-based gaming. Seems like a decent game for those who are fans of turn-based strategy. Be sure to read the included BG.DOC file or have it open while playing for important controls / gameplay information.

If you enjoy Battle Ground, you might also enjoy playing these games: 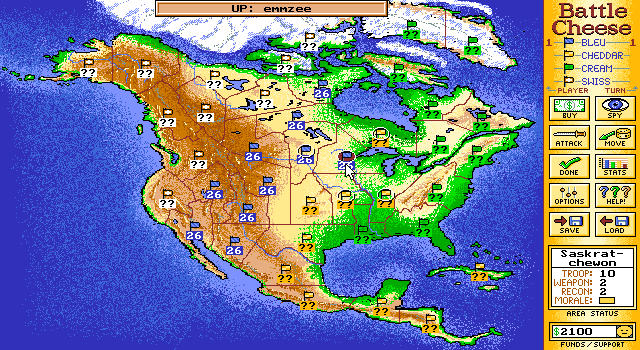 Battle Ground, #1150. Added to website: 2020-07-09. All copyrights, trademarks, etc, are property of their respective holders.
Back to top
Rating:
Saving
Saving, please wait
What is a file_id.diz file?
FILE_ID.DIZ is a plain text file containing a brief description of the content in an archive (ZIP file), usually written by the developers themselves. It was often used in archives distributed through bulletin board systems (BBS).
Battle Ground screenshot