DOWNLOAD THE GAME FREE
DOSBOX_BATCHEESE.ZIP - 876k - Run BC.EXE to play
Downloading ...
Found your game? Great! Glad you found it! Please consider saying thanks by making a small donation to support DOSGames.com. There are also other ways you can help!
Need help running the game? Check our DOSBox Guide to run DOS games on modern computers.

Original archive (BATCHEES.zip, 895k) - The main download file above (DOSBOX_BATCHEESE.ZIP) is pre-configured to work DOSBox. This file, BATCHEES.zip, is the original and may require installation / setup.

DOSGames.com Review:  Rating: 3.5
Battle Cheese is a military strategy game similar to Risk and other board games where you battle for supremacy over an area of land. The shareware version of this game is limited to either North America or Europe. Only one human player is supported in the shareware version, two in the full game. Each of the four opponents is given a section of land and automatically assigned troops at the start of the game. Then they take turns buying things, moving around, and attacking others. If you enjoy this kind of military strategy game, you may enjoy this game too. You'll also get to see a nifty title screen animation, followed by a creepy menu screen background ...
FILE_ID.DIZ:
*********  Battle Cheese v1.0  ********
* Command your army of mutant cheese  *
* troops in a conquest for the world! *
* An exciting strategy game that      *
* features hi-res VGA graphics, Sound *
* Blaster support, and point & click  *
* interface.  Shareware--only $8 for  *
* the enhanced, registered version!   *
*          By Brad Boggess            *
***************************************

If you enjoy Battle Cheese, you might also enjoy playing these games: 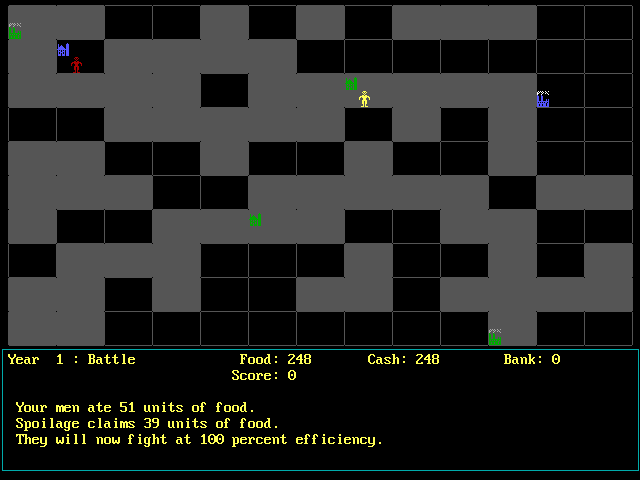 Battle Cheese, #1151. Added to website: 2020-07-10. All copyrights, trademarks, etc, are property of their respective holders.
Back to top
Rating:
Saving
Saving, please wait
What is a file_id.diz file?
FILE_ID.DIZ is a plain text file containing a brief description of the content in an archive (ZIP file), usually written by the developers themselves. It was often used in archives distributed through bulletin board systems (BBS).
Battle Cheese screenshot