DOWNLOAD THE GAME FREE
TSD.ZIP - 3,870k - Run TSD.EXE to play
Downloading ...
Found your game? Great! Glad you found it! Please consider saying thanks by making a small donation to support DOSGames.com. There are also other ways you can help!
Need help running the game? Check our DOSBox Guide to run DOS games on modern computers.

DOSGames.com Review:  Rating: 4
Battle Arena Toshinden is a well-known Playstation 1 3D fighting game. It was one of the first games I bought for my PS1. It's a Tekken-style one-on-one fighting game that involves mostly hand-to-hand combat and combos. Apparently a DOS port was also made of the game, and it's better than you might think, although not the same as the PS1 version even though it shares the same characters, moves, and controls. The controls are certainly one of the trickier parts, since using the keyboard to move around in 3D while trying to remember what all of the attack / block / etc buttons do can be challenging! It runs a little slowly as well, no doubt due to doing all of its 3D work without the aid of a 3D accelerator card. An impressive technical achievement if nothing else! This demo version contains 3 characters from the full version: Eiji, Sofia, and Mondo. Apparently Earthworm Jim is also a playable character in the full version?!
Instructions:

If you enjoy Battle Arena Toshinden, you might also enjoy playing these games: 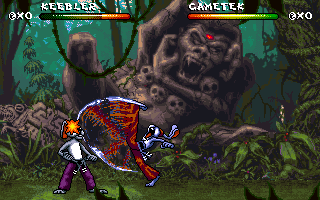 Battle Arena Toshinden, #837. Added to website: 2019-01-31. All copyrights, trademarks, etc, are property of their respective holders.
Back to top
Rating:
Saving
Saving, please wait
What is a file_id.diz file?
FILE_ID.DIZ is a plain text file containing a brief description of the content in an archive (ZIP file), usually written by the developers themselves. It was often used in archives distributed through bulletin board systems (BBS).
Battle Arena Toshinden screenshot