DOWNLOAD THE GAME FREE
ballns10.zip - 82k - Run BAL.EXE to play
Downloading ...
Found your game? Great! Glad you found it! Please consider saying thanks by making a small donation to support DOSGames.com. There are also other ways you can help!
Need help running the game? Check our DOSBox Guide to run DOS games on modern computers.

DOSGames.com Review:  Rating: 3.5
Balloons is a quick game of logic between two players or one player and the computer. The object is to take turns popping balloons while making sure to leave the last balloon for the other player. There are four different computer skill levels to choose from, and while the game is not extremely deep, games go quickly and it is presented very professionally.
FILE_ID.DIZ:
BALLOONS v1.0. - A strategy game for adults
and children.   Hanged balloons in an array
are punched  following a simple rule.   The
object of  the  game is to  leave  the last
balloon  to  the  opponent.   Can be played
against the  computer  or  against  another
player.  Four levels of  computer skill are
selectable.  Needs VGA  graphics and mouse.

If you enjoy Balloons, you might also enjoy playing these games: 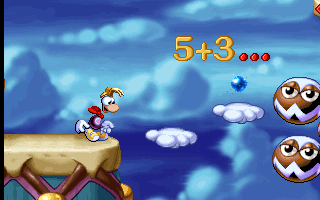 Balloons, #247. Added to website: 2017-12-24. All copyrights, trademarks, etc, are property of their respective holders.
Back to top
Rating:
Saving
Saving, please wait
What is a file_id.diz file?
FILE_ID.DIZ is a plain text file containing a brief description of the content in an archive (ZIP file), usually written by the developers themselves. It was often used in archives distributed through bulletin board systems (BBS).
Balloons screenshot