If you're on Win7 64 you already know that you can forget running 16 bits ol'windows software on it.
Solution is to install Windows XP mode and Virtual PC for Win7 64.
The program is to download directly from Microsoft, freeware.

First you need to download Windows XP mode and VPC for Win7 64:
(click on pics to enlarge)

Notice: you will need to validate your Win 7 to be allowed to download/install the software. 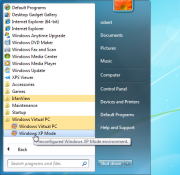 Some setup screens (you only get those at first run..)

Basic install with 512MB, you can adjust memory settings, highly recommended, some 1-2GB RAM won't hurt (if your host can take it).

That's a nice addition , it's now finally possible to attach an USB key/drive in your Windows XP mode

High time to run something ...

Oh yeah, a little bit sluggish, but it runs

And this is just for fun you're better off with dosbox .....

Larry says: Or if you're feeling hardcore, you can emulate XP in which you run DOSBox for Mac in MacSOFT in order to boot Windows 3.0

[Edit 10-12-2011]
It's been a while now, had time to test a lot of things with XP mode under Win7.
Have to say it's a great soft to run old applications or use old printers that refuse to run-work in Win7, but for gaming it's a let down. Not that surprising, after all it was never meant as gaming platform.

Larry intruding in dosraider's post wrote: Larry says: Or if you're feeling hardcore, you can emulate XP in which you run DOSBox for Mac in MacSOFT in order to boot Windows 3.0

Seems my friend Larry misses some points here, it is not about being hardcore, but about getting some older Win 16 bit softs running in a 64 bit OS.
Keep in mind that many W9x installers are 16 bit, even if once installed the software will run in 32 bit and thus in a 64 bit OS, countless games/softs are in that case, with Windows XP mode you can get those games/soft to install (even on your 64 bit OS's HD via 'shared folders') and then run the games/soft directly in the 64 bit OS.

Also some software (not talking about games here) won't run at all in a 64 bit OS, I mainly think about older (USB or not) printer software, there are zillions matrix printers still in use, but their software is 16 bit (personally I still use my antique HP500 deskjet besides moderner printers, main reason: do it yourself refill, cheap as dirt ....), some of those printer software is W3/W9x based, will run in Windoows XP mode and you can print via 'shared', and of course there are the ol'matrix printers, they are ideal to print long listings, howtos ... last but not least they can do carbon copies.(And the noise they make, lovely, simply a lovely noise, really).

Waw, that was a long post, just to clarify some thingies ..... LOL.

I was actually trying to make a joke.

abyss wrote:I don't even know if starcraft 1 was a windows or dos games.

ModBot™ - Faster than the speed of spam!(and always taking it to where it belongs!)
Top

Return to “Get Games to Work”