Add your own reviews of games here.
Post Reply
6 posts • Page 1 of 1

Hello everyone, I'm new here, so I thought I would contribute by writing off a review for SPISPOPD. 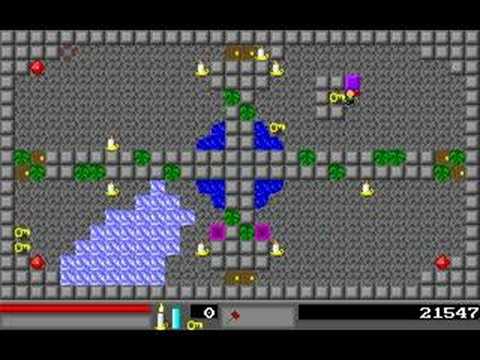 This game was developed by Mike Hommel of Jamul Software (Which is now an empty site, but it's still there). This game was supposedly created in 48 hours and as a joke to a cheat code in Doom, IDSPISPOPD. This game is rather vulgar and at the same time hard. This game was released in the year 1993.

All the pumpkins of the world cower in fear again, as another Halloween
approaches. As always, they are destined to be culinarily transformed
into grotesque icons of a pagan tradition. Their only hope was to steal
all of Earth's candles and take them away to the distant pumpkin planet,
Pumpkinia.

Despite tremendous security measures, the pumpkins succeeded and now Earth has no candles. If the power goes out, everybody is SCREWED. The only hope is Bouapha, the Gourdslayer. He hops into the specially designed TX-34Z Rocket Ship and blasts off for the Zeta Toejam star system.

CAN BOUAPHA AND HIS MIGHTY HAMMERS OVERCOME THE PUMPKINS!?
_____
Gameplay:

The gameplay is quite simple, but atleast it's not slow or blocky, you can accelerate the speed of the game by pressing F10 by the way. You play as Bouapha, the red gems are the hammers, and the rest are powerups. In each level you have to pass various obstacles such as doors, pumpkins, water, lava and space, and various crazy bosses. It's indeed very hard, the goal of each level is to collect all the candles and get to the landing pad. There are also cheats which can help you. This game is very vulgar for it's death scenes, as blood spews out of the hero's head when mowed to death by a pumpkin, and several other scenes along the same lines, so it's not really for the faint of hearth.

The music is rather bad, it doesn't sound so finished, but it fits the theme very well. It's sounds really robotic.

The sounds are really in low quality and are absurd. But what do I expect from an Old DOS game. Beware that there are also some swear words.

This game has multiple levels, and multiple biomes to play in such as, Desert, Water, Forest, Funky, and so forth. In each area there are sometimes new characters and sometimes the same old ones, but with a few nice touches such as: In the desert, the pumpkins wear clothes of an Arabian. Though some may consider that profanity.

This game is rather vulgar, it's hard but fun, and it introduces a few elements which other games just don't have. This game would be for people who want more linear action, and no hard puzzles which take forever to complete.

Notes: For those who have trouble downloading the game from this sate, here is another download link which works, completely safe as far as I know: http://hamumu.com/goods/SMASH247.ZIP

There is a sequel to the game by the way, and it's far better, strange how some sequels are better then the original. But since this site says no Spam, I can't really say where to get it. If you're interested PM me, or whatever, I don't really fully understand how this site works.
[/img]
Top

Hi REACTOR, welcome to the forum and thanks for contributing a review!
Owner / Webmaster of DOSGames.com for over 20 years

Download my free ebook: The Historical Reliability of the New Testament
Top

Yeah, thanks for the nice message I guess.
Top

Nice review, seems to be a nutcase game ....

Yeah, it is pretty much a nutcase game, it can get quite tedious if you are not into coarsely designed mash-em up levels all the way through.
_____
Here is an interesting fact, the original designer of this absurd, and some may consider, "not for children" game, started a family friendly website.
Top

There are addons for the game, I have seen one, but unfortunately I lost the link.
Top
Post Reply
6 posts • Page 1 of 1